Puppy Linux is a unique family of Linux distributions meant for the home-user computers. It was originally created by Barry Kauler in 2003.

If one of these things interest you, read on.

Yes, but what does it look and feel like? 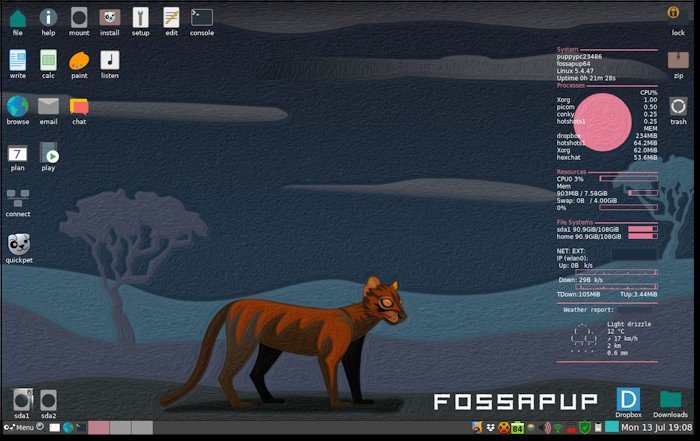 Puppy Linux is a collection of multiple Linux distributions, built on the same shared principles, built using the same set of tools, built on top of a unique set of puppy specific applications and configurations and generally speaking provide consistent behaviours and features, no matter which flavours you choose.

There are generally three broad categories of Puppy Linux distributions:

Get the ISO, burn it to a CD/DVD using your favorite CD/DVD burner, or flash it using dd (Windows version) to your USB flash drive, or visit our download page for more comprehensive information.

It has been said that the best experience of Puppy Linux is not from the software itself, but from the community that gathers around it. Whatever you have in mind - praises, curses, questions, suggestions, or just plain chit-chat, we welcome you to join us at Puppy Linux Discussion Forum or just check the discussions for the latest puppylinux woof builds.

I need more info before deciding to try …